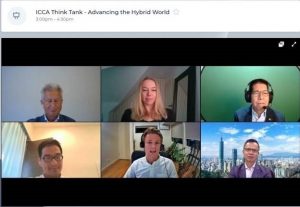 On the invitation of the Amsterdam-based International Congress and Convention Association (ICCA), PCAAE, represented by its Founder & CEO, Octavio ‘Bobby’ Peralta, in his concurrent capacity as President of the Asia-Pacific Federation of Association Organizations (APFAO), participated and was one of the panellists of the “ICCA Think Tank” virtual event with the theme, “Advancing the Hybrid World.”

The program, sponsored by the Taipei City Government, was held on June 30, 2021and attracted 176 attendees from 37 regions around the world. The programme, which examined how international associations have leveraged digital technology to enable cross-border meetings, was opened by Senthil Gopinath, CEO of ICCA and Ko Wen-je, Mayor of Taipei City.

The other session panellists included Jaap Bakker of ICCA; Tadeja Pivc-Coudyser of the Hybrid City Alliance; Chen-yu Lee of the Taipei Smart City Office; Thomas Grey of EventsAir, and Jason Yeh of the GIS Group. The session was hosted by Jessica Chiang, CEO of JCIM.