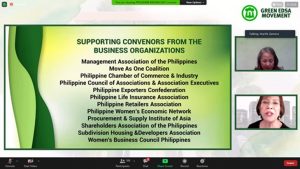 Performing their civic duty, PCAAE and some of its members, joined as supporting convenors of the Green EDSA Movement (GEM), an initiative to transform EDSA into a tree-lined greenway and to prioritize people’s mobility. GEM was launched virtually on April 22, 2021 which coincided with the Earth Day celebration.

GEM is spearheaded by a volunteer group of non-commercial, non-political and staunch advocates for the protection and enhancement of urban environment. Speaking at the launch, GEM chairman Eduardo Yap said the initiative’s goal is to transform EDSA, Metro Manila’s major thoroughfare, into a green highway.

As a supporting organization, PCAAE has no obligation than to voluntarily support the Movement’s advocacies and activities which will be undertaken in accordance with its Manifesto.